Showing posts from December, 2016
Show all

Beauty and the Blacksmith by Tessa Dare #review 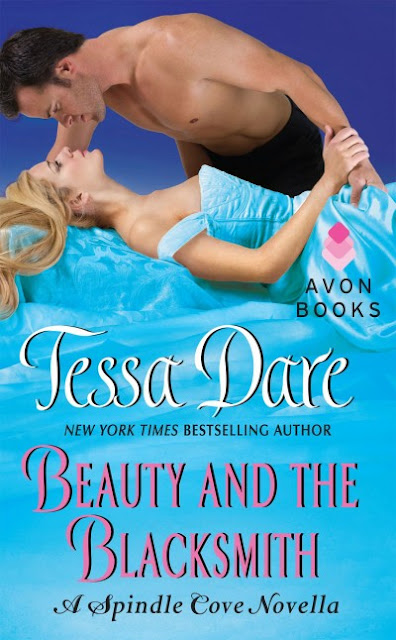 Pages -   224 pages Publisher -  Avon Impulse Published -   April 30, 2013 Amazon -   Link Genre -  Regency Romance Series -  Book 2 of 5 in the Spindle Cove series Language -  Irrelevant Sexual Content -  3/5     Beautiful and elegant, Miss Diana Highwood is destined to marry a wealthy, well-placed nobleman. At least, that’s what her mother has loudly declared to everyone in Spindle Cove. But Diana’s not excited by dukes and lords. The only man who makes her heart pound is the village blacksmith, Aaron Dawes. By birth and fortune, they couldn’t be more wrong for each other…but during stolen, steamy moments in his forge, his strong hands feel so right. Is their love forged strong enough to last, or are they just playing with fire? (This is a novella of approximately 36,000 words. Also included is a two-chapter preview of Do You Want to Start a Scandal ,  9/27/16.) My first Tessa Dare novel, and I'm still not ready to decide if it will be my last. S
Post a Comment
Location: Detroit, MI, USA
Read more

Book Title: Scoring with Santa  Author: Theresa Roemer & Renee Rose  Genre: Sports Romance  Release Date: December 20, 2016  Hosted by: Book Enthusiast Promotions A career-driven mom. Houston’s most eligible heartthrob. The irresistible attraction could destroy both their careers. Rick Morehouse doesn’t date single moms. As the former quarterback for the Houston Texans, he’s Houston’s most eligible bachelor. But after the heartache of abandonment by his own mother’s string of boyfriends, he never wants to hurt anyone’s kids that way. When he meets Brandy Love, the drop-dead gorgeous owner of Phenomenal Physiques, he’s totally taken by the confident career woman. It’s too bad she has kids. Brandy Love doesn’t have room in her life for a relationship. Opening a chain of gyms and parenting her kids already takes more time than she has. But when Coach Charming drops in on her gym, she’s sorely tempted. When a vengeful columnist roasts Ric
Post a Comment
Read more

Book Title: Run  Author: Eve Vaughn  Genre: Dark Romance  Release Date: September 6, 2014  Hosted by: Book Enthusiast Promotions The Hunter… Dare O’Shaughnessy had the world in the palm of his hand. A man known and feared for his ruthlessness, his word was law. The last word he ever expected to hear was no. Until he met her. The Prey… Aya Smith despised the ruling class who looked down on hardworking people like her. Sick of being treated unfairly by laws that protect the wealthy and punish the poor, she takes a stand but soon realizes, she might have crossed the wrong man. The Game… Created as a government program to assist in the repopulation of the country when an untested drug wipes out millions of women, The Run eventually evolves into something much more sinister. Now played for the amusement of the super rich, women down on their luck find themselves the prizes of sadistic masters. Aya is forced to volunteer for The Run, and Dare
Post a Comment
Read more
More posts