Book Review - Stranger in My Arms 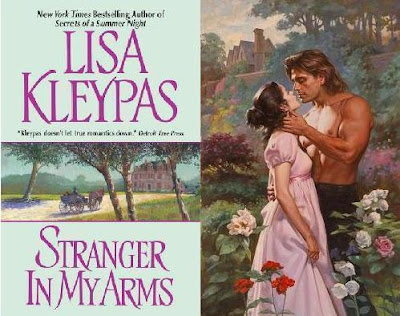 "Lady Hawksworth, your husband is not dead..."

With these words, Larissa's life turned upside down. Hunter, Earl of Hawksworth, had been lost at sea. Or so she'd been told. Their unhappy marriage -- with its cold caresses and passionless kisses -- was over. But now a powerful, virile man stood before her, telling secrets only a husband could know, and vowing she would once again be his wife in every way.

While Lara couldn't deny that this man with the smoldering dark eyes resembled Hunter, he was attentive and loving in ways he never was before.

Soon she desperately wanted to believe, with every beat of her heart, that this stranger was truly her husband. But had this rake reformed-- or was Lara being seduced by a cunning stranger?


Larissa (Lara) was as cute and innocent as they come, and I actually liked her right away and up to about the ending, when she did something very stupid and made me so angry, I thought about not reading any more of the story.

And then after about two minutes, I read on . . . because I couldn't NOT read on! I finished this novel in less than a day, which tells you something about its content and draw power.

What an exciting story!

We never actually meet Lara's 'real' husband because at the start of the story, he is dead three years already. She then receives the startling news that Hunter, Earl of Hawksworth, isn't actually dead and is returned to London from India.

They'd been married five years total, but after only two, Hunter decides to travel to India, and on the return voyage that proves disastrous, he perishes.

Or, so we are all led to believe.

Hunter's mother is traveling the continent, and Hunter's Uncle and Aunt have taken up residence at Hawksworth Manor, turning it into a garish bawdy house and plowing through what little income the estate makes.

They've relegated Lara to a small cottage nearby, and she's actually happy there. Happier, that is, than having to live with, listen to, and put up with the aunt's caustic taunts and jibes about Lara's worthlessness and barren state.

It was a loveless marriage from the start, and Hunter is an arrogant brute of a man, robust, outdoorsy, and completely callous in his treatment of Lara. It is never mentioned, but the man resorts to rape as opposed to lovemaking, and for a virgin, this can't be good. She hates him and the act and is secretly glad that he is no longer around to harass and humiliate her.

Lara isn't stupid, either. She knew early on that Hunter only married her to produce a legitimate heir, but when that doesn't happen, he hurries right back to his middle-aged mistress and only occasionally accosts his wife when he is drunk or angry.

She's taken up her own causes by working at a local orphanage, making medicine for the elderly in the village, and occasionally does some matchmaking as well.

After the family physician and a few close friends confirm the fact that Hunter has indeed returned, though not quite the same man as before, Lara is devastated but dutifully decides to restart the marriage. Hunter seeks her out inside the tiny cottage, startling her, and then the leaner, more masculine version of her husband proceeds to say and do a lot of things that make Lara start to believe he has definitely changed for the better . . . except that she refuses to let him have sex with her.

Cat and mouse ensues, but in a delightful and not too sappy or even predictable kind of way. Hunter is endearing, charming, well-mannered, and extremely schooled in the art of lovemaking. He's crazy about Lara and he can't stop letting her know it, which only helps to confuse and startle her even more while also helping to draw her closer and closer to him.


It's a little weird that while Hunter proved to be one of Lisa's better male leads, it was still a bit difficult to picture him fully in my mind. From the neck down, yes, but as for his face and features . . . I left it entirely up to the man on the inside cover to guide me.

And, I think that has a lot to do with the writing and the premise of the story. Is he or isn't he? A bit of a wraith in my mind until secrets are revealed, the truth unfolds, and then it is too late because the story concludes not too long afterward.

Yes, I loved Hunter. Yes, I adored Larissa. I especially liked the interesting story line behind these two and how it all came together in the end. I rooted for them, got into the setting with ease, and could even envision the garish household being slowly transformed back to its former glory.

This was another novel that did third-person omniscient and head-hopping without supposedly throwing me off or confusing me. It can be done, people, and I am more determined now than ever before to revert BACK to this style of writing. It is seamless, intriguing, and filled with just enough description and back story to HELP me understand and not bog me down or bore me.

Yes, I would definitely recommend this to anyone interested in reading a regency romance novel that doesn't follow protocol or a formula for that genre, and that dares to go beyond rich aristocrat and tell us what life was really like for those outside the realm of fairy tale living.

Your comments, thoughts, suggestions, issues, and insight are always welcome. Please feel free to reply to any of my posts.