Secrets of a Summer Night review 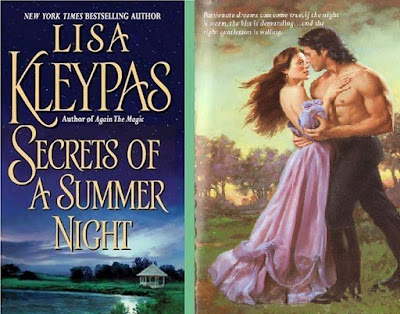 
The Wallflowers
Four young ladies at the side of the ballroom make a pact to help each other find husbands . . . no matter what it takes
Proud and beautiful Annabelle Peyton could have her pick of suitors — if only she had a dowry. Her family is on the brink of disaster, and the only way Annabelle can save them is to marry a wealthy man. Unfortunately, her most persistent admirer is the brash Simon Hunt, a handsome and ambitious entrepreneur who wants her as his mistress.
Annabelle is determined to resist Simon's wicked propositions, but she can't deny her attraction to the boldly seductive rogue, any more than he can resist the challenge she presents. As they try to outmaneuver each other, they find themselves surrendering to a love more powerful than they could have ever imagined. But fate may have other plans — and it will take all of Annabelle's courage to face a peril that could destroy everything she holds dear.


With a computer always at the ready, it still strikes me as odd that I never remember to check online for series publications so that I'm reading the FIRST first and not somewhere down the line first.

Of the six total novels in the Wallflower series, this is my 3rd read -- but it is the first in the series.

Regardless, I loved it. I knew I would love it even before I began reading Annabelle's pathetic tale of woe that turned happily-ever-after.

It was cute, humorous, and page-turning night after dreamy night for me.

Simon Hunt is one of Lisa's hunk-i-er male protagonists, and he'll be on my mind for days now, thank heavens.

Which is why I buy, read, and get so lost in these books, by the way.

The well-developed, pull-you-in-effortlessly male leads (and sometimes the antagonists) that are so easy to envision, gain a feel for as if they live next door, and end up rooting for regardless of their shortcomings.

And, I suppose a lot of young women TODAY would say these men from back in the day, are rife with those shortcomings.

I'm the sort who almost wishes things had stayed the same in some regards. Like chivalry and manners, being a complete gentleman and showing respect toward any and all women.


This came out in 2004, and I still say it was around this time that the beginning of the end occurred for smooth, flawless (well, there was one type-o that read mean instead of meant) wording; head-hopping and description of everything from a flower garden to a bedspread (counterpane).

I find zero wrong with these types of instances occurring in any novel, and I'm dismayed to know that it is because of the level of intelligence on the part of the reader today that has us struggling to understand a majority of what is being published now.

Simple and precise is not always best.

I will admit to getting a little headache-y as the author described the Foundry that Simon owned. Technical babble that went right over my head and made me start to skim.

Also, there were two left-unsaid parts: one where Annabelle falls ill at a ball and Simon rushes in to help. He tells Lillian to go find Westcliff (the homeowner) and Annabelle's mother and have one of them fetch the doctor. Then he tells Lillian's younger sister, Daisy, that he has a sinking suspicion that Annabelle is worse off than she presumes before he hurries her up 3 flights of stairs to her bedchamber.

Later, when Westcliff arrives, he tells Simon that Lillian had accused him of being a thoughtless Earl for leaving the grounds rife with vipers.

Now, I went back and re-read the scene and still couldn't find where Lillian would be privy to that knowledge. She couldn't have know what struck Annabelle down because she wasn't there, and yet ...

The second bit of confusion occurred toward the end, after Simon and Annabelle come together. She told us that Simon had his moods, and that one occurred after she had quoted an author about love and Simon scowled at her before saying that he hopes she doesn't intend to continue quoting lame author remarks about life.

I waited and waited for an explanation for his mood and the reason why he said what he did, but that never occurred.


With every novel I've ever read by Diva Kleypas, there has always been a 3 out of 5 degree of sexual content involved. I say 3 because I am assuming most everyone else doesn't mind or even likes to read about such things as oral and finger penetration, but not me.

I almost get the feeling that the author relies on past writing for the sex scenes because they are basically the same thing: the first encounter is always cautious and overly gentle with her being timid or wary while he coaxes and teases until she surrenders.

And, always, always with the oral presentation after a finger poke or three.

Not my cup of tea.


I am not enjoying Lisa's latest novels in present-day using first-person, so I look forward to the day when she publishes another of these historicals.

I will ALWAYS highly recommend her work to anyone who enjoys historical romance because I think she has a way with words, she knows her history, and she creates some of the most memorable characters ever.