Man of My Dreams - a review 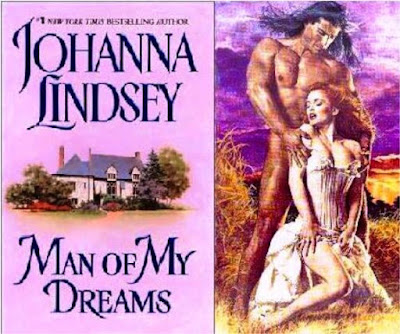 
Wildly unpredictable, the most desirable beauty in the land, Megan Penworthy has set her amorous sights on Ambrose St. James, a man she has never met but has every intention of marrying. And no other suitor will satisfy her - especially not the common, if uncommonly handsome, horse breeder, Devlin Jefferys.

Posing as lowborn Jefferys to escape a potentially fatal confrontation, Sir Ambrose is enthralled by the brazen, duke-hunting redhead. Without revealing his true identity, he vows to seduce and tame her, thereby foiling Megan's plans to marry the man of her dreams. But the notorious rogue never imagined the enchanting schemer would turn out to be the only woman he would ever dream of marrying.


I liked it. I didn't LOVE it, but I certainly liked it and enjoyed the three-day read about two very feisty people who happen upon one another in a most unusual way and end up drawn to one another almost instantly.

Megan Penworthy wasn't one of Johanna's typical leading ladies - refreshing. She had a temper, a mouth, and prideful determination, of course, but she wasn't one of those mulish, confounded sorts who just doesn't get with the program until the last three or four chapters of the book, and so I was glad for that.

Duke, St. James was a bit over-the-top in the alpha male department, but that is to be expected of a novel of this type, in this genre, and at the time of its 90's release date. He was tolerable to my taste level as most male leads go, and because of his tall, dark-featured, handsome looks and his long hair as well as an impeccable body, what's not to love?

He did take her over his knee once, and then he continued to threaten her with more of the same. Now, even when I was around back in the 80's and an intro reader in the late 70's, that type of behavior had and still does not sit well with me, but I get it and am not too squeamish to realize how it comes into play in the seduction category of things.

As for the sexual tension, it was terrific, and as for the sexual content, it was extremely mild. I actually felt a little gypped, if you can believe that. I mean, Devlin was such an over-the-top hottie that you'd think her experience with him would be mind-blowing. I wouldn't know, though, because their emotions before held high, during became muted, and afterwards were . . . either another face-off or just wispy hints of loving memory.

He hated the name Ambrose, and I hate the name Devlin, so it was a stand-off for us both (lol).

In the second novel, Lachlan makes his return. He appeared in the middle of Man of My Dreams and I was instantly enamored! I had hoped he would end up with his own story and am glad to know it is true.

Freddy (Frederick), the Duke's best bud, also deserved a story of his own, but sadly, that isn't the case with #3 in the series, but I do still intend to read #3 as well.

The 90's was the time when Ms. Lindsey decided to stop publishing in paperback form and go with the hardcover, tabletop variety of book that I could not afford and so had to stop reading her work. As a forever friend of the local library, however, and because a majority of those hardcover were eventually paperback printed, I'm able to do some catch-up reading, which is why you're hearing about such old works here.  :-)

I would definitely recommend this to anyone who hasn't read any of Johanna Lindsey's work.

Your comments, thoughts, suggestions, issues, and insight are always welcome. Please feel free to reply to any of my posts.