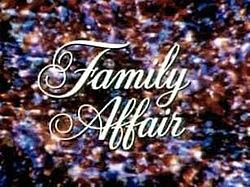 Hello, and welcome to Week 10 of the MFRW Author Blog's 52-Week Blog Challenge.

This week, our Challenge questions is: Things Only My Family Would Understand

If this is supposed to be about me, then I'm afraid you will be disappointed because even as old as I am, I have NO IDEA what others think of me other than I'm odd, weird, ridiculous, and the black sheep of the family.

Sorry to have to sound really BORING this week (maybe every week?), but in our family, we've continued to live by the What Happens in Vegas Stays in Vegas motto.

You won't be reading any juicy, insider gossip meant to make your toes curl or your cheeks flame because that just isn't in my (our) DNA.

As a matter of fact, when I returned to college for the second time, I was already moved back in with Ma after she'd had her heart attack, and I had to leave my place 'up north' to take care of her, so I thought why not try (again) to get that stupid degree?

Long story short, Ma enjoyed reading the articles I had to write for various classes, and I was always amazed by her reactions to them.

Well, not the utterly reserved reactions (because, 'Yeah, I suppose this is good' is a big compliment to my ma's mind!) but more the fact that she actually wanted to read them!

Until the one time when I wrote that my parents were ten years apart in age.

The way Ma reacted to that one, you'd have thought I let the entire campus know some deep, dark secret so shameful it warrants death by firing squad to have revealed.

Her reaction was so insanely over-the-top (to my mind) that I just wouldn't let her read anything else I had to write.

Because, at my age, and after having been shell-shocked that way so many times already, I was a bit tired of the landmine game we still seem to be playing.

I can't recall the name of the class other than it was in the Linguistics Department and concentrated on things like values, customs, and a whole host of Quirky Nature type conversations about not just Americans but people the world over.

(we were actually encouraged to eavesdrop on campus conversations for one assignment!)

For this particular assignment, I finally got to talk about the odd yet (to me) funny fact that while growing up, a majority of our friends could say their father had served in Korea or Viet Nam.

Yet, here was me (and especially my youngest brother) getting to brag about the fact that our father had been a Marine in World War II (because that was EVERYONE ELSE'S grandpa!).

I still think it's really weird and strangely fascinating that when Pop enlisted his Senior year of High School, Ma was eight years old!

In all honesty, I spent the entire week trying to think of what to tell you guys that makes sense, is completely in line with today's topic, and that may seem truly unique to ANYONE ELSE.

But, I can't come up with things other than what I just told you.

I suppose I could mention that everyone on this block who owned a Ranch-style house used the small, open area just beyond the galley kitchen as a dining room... except for us.

Ma set up that little niche as an oddly arranged seating area too far away to see the TV (which, by the way, was on the opposite wall from EVERYONE ELSE on the block), so the recliner always sat at this odd, open angle with dead space behind it.

Except at Christmas time, when the dead space is filled with the tree (while EVERYONE ELSE places theirs in their picture window).

Every home I ever entered always had a glass butter dish, a bottle of HP (House of Parliament steak sauce), and the Tupperware salt & pepper shakers centered on their kitchen table.

At our house, it's a napkin holder and a sugar jar (even though Pop is gone now and no one drinks coffee to use the sugar jar).

If you want butter, you have to wait until it thaws because Ma kept it in the refrigerator until she started buying those tubs of fake butter (Country Crock).

And, we never owned a bottle of HP (or any other kind of steak sauce) because Pop hated it and liked his steaks well-done with zero embellishments, including salt & pepper!

When I moved back in here, my glass butter dish came with me, and it's been on the kitchen table, in front of the napkin holder, ever since.

And, speaking of napkins, I'm not sure how anyone else does it, but Ma keeps placing the napkins in upside down (to my mind) so that when you reach for one, you grab at least 4 because it isn't the folded side up!

I never knew this, either, but according to an old-time HGTV housekeeping show, the FLAT sheet is supposed to go on the bed inside out so that when you fold back a corner of the sheet/blanket, the pretty pattern shows.

We've always placed the pattern face-up and to hell with the fancy-schmancy 'fold'.

Is this what I'm supposed to be sharing this week?
I feel like I'm way off track again and oddly embarrassed by the whole post.

Since this is Lent, I may as well add to this hodge-podge list of Family Oddities that during Lent, we always sacrificed throughout (including every Sunday) when, in reality, or so it seems based on what EVERYONE ELSE says and does, that you are exempt from any 'giving up' on Sundays.

The first time I heard this, I was already married with kids of my own!

"What? You mean all this time I've been giving up something until Easter Sunday, and you guys have been cheating EVERY Sunday?"

It didn't seem fair to me, or right, especially since, to my weird way of thinking, it immediately conjured up images of Jesus having left the desert every Sunday to waltz into town and stuff His face until He about puked before moseying back into the desert for the next six days of total fast & abstinence.


So, we continue to go the distance and not indulge in whatever we've sacrificed, even on Sundays, until Easter Sunday arrives.

And, I find it hard to believe you guys enjoyed your Easter Basket stuffed with goodies HALF as much as I did, what with you having gorged yourselves every Sunday! 👅


Lastly, and again, this might not be on target, but I have to say it always struck me as a bit odd (and, of course, funny) that my parents were the only parents to listen to Classical and Big-Band Music while EVERYONE ELSE'S parents enjoyed modern music.

Well, if you are talking extended family, my mother and her sisters had this ongoing yet light-hearted 'feud' about who had the best music taste: Aunt Phyllis (Frank Sinatra), Aunt Lois (Tom Jones), and Ma (Mario Lanza).

She is the only woman I know who listens to Opera... always has, always will.

I still hate it, but the point I'm trying to make here is, long about the late 90s early 00s, Nabisco offered a cracker commercial (which I can't find on Youtube, sorry!) that, about toward the end, blasted an opera song.

And, sure enough, I about fell out of my chair laughing because I knew right away it was Mario Lanza.

(seriously doubt ANYONE ELSE in the whole, wide WORLD knew it!)

Sadly, I wasn't alone at the time, and my friends, my soon-to-be Ex, and his friends, were staring at me like I'd just lost my marbles.

And, worse, when I calmed down and explained to them about the song and who it was singing, their expressions only got worse.

And, if you must know, I was always on the side of my Aunt Phyllis.

As always, I thank you kindly for stopping by and reading my post!

Please scroll down to the LinkyLink tool and click on the next in line to discover what Things Only Their Family Would Understand!

Blogging is an opportunity for authors to connect with readers. Despite being writers, blogging is an entirely different style of writing and often stumps us. To help our authors blog consistently, thoughtfully, and with purpose, Marketing for Romance Writers is announcing the 2018 Blog Challenge. Each week, authors use our writing prompt to create a meaningful blog post. We'll be posting every Friday... join us as often as possible.

All authors with blogs are welcome to participate. 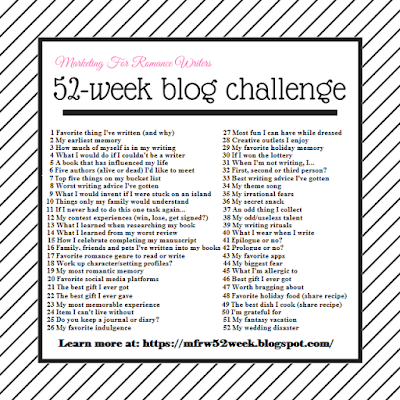 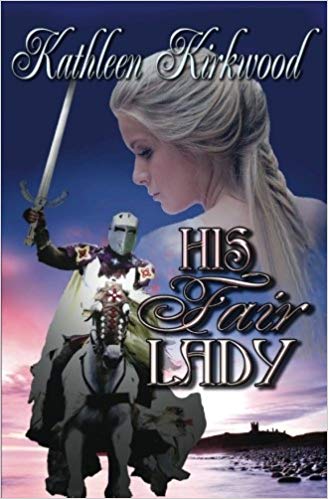 Today I review His Fair Lady by Kathleen Kirkwood. Pages -  325 Publisher -  ByDand Publishing Published -  August 31, 2012 Sold by -  Amazon Digital Services LLC Genre -  Historical Romance, Medieval Sexual Content -  4/5 Lamguage -  1/5 Narrative -  3rd Person A maiden to be saved . . . During the murderous assault on the village of Vaux , little “Ana” lost all she knew. Then, suddenly, out of the burning wreckage, a young man appeared and rescued her from the horrors of the night. He proved to be a squire in a company of knights, on their way to join the Crusades. At a neighboring village, he delivered her into the care of a peasant couple who promised to love her. Before departing, he gifted her with something to remember him by . . . the silver cross from around his neck. A wrong to be righted . . . After a decade of fighting in the east, Sir Royce de Warrene returns to England a celebrated knight. But he soon discovers the terrible mis
Read more 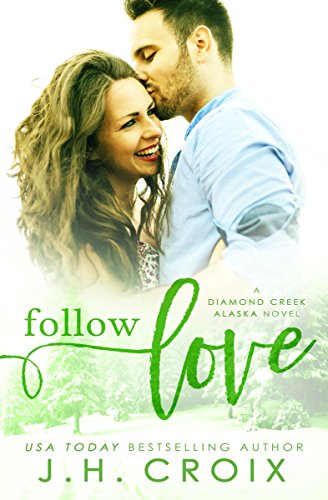 Today, I review Follow Love by J. H. Croix, Book Two in her Diamond Creek, Alaska series. Pages -  260  Published -  March 1, 2015 Sold by -  Amazon Digital Services LLC Series -  Diamond Creek, Alaska, Book Two Genre -  Contemporary Romance Language -  3/5 Sexual Content -  4/5 Narrative -  3rd P On vacation in Diamond Creek, Tess Stanton plans nothing more than fishing and sightseeing. After a rough year that left her convinced love wasn’t worth it, the last thing on her mind is falling for a handsome and way too charming fishing guide. Nathan Winters is the quintessential outdoorsman who finds Tess’s reserve too tempting to ignore. Despite her qualms, Tess can’t resist Nathan’s down-to-earth charm. What was supposed to be a fun fling becomes so much more once Nathan and Tess yield to the sparks that fly between them. Steamy, sensual passion stokes a love that can’t be ignored. When Tess returns home, far away from Diamond Creek, she is confront
Read more